How many total cars (all brands) did Durant Motors produce in its lifetime?

Hard to say when no one knows the last vin's on most models US / Can, plus they jumped vins we assume to make it seem they made more than they did. US made models that Canada didn't and vice versa. Its like how many model 633 Durant's were made by Dominion Motors at Leaside with no info on them, yet two exist. Promo or production 9, 11, 15 ?? Same with the 416 Rugby truck with no info or vin ranges. Only place the 416 and 633 get mentioned is in Durant aftermarkets. Until a 1933 parts book from Dominion showed up on eBay a few years back, it listed the models and years. There was the 416 so not a misprint in our aftermarkets, but the 633 wasn't there. As plants closed factory records disappeared.
Always more questions than answers with vehicles connected to Billy 1921 to 1934

Wow! I had no idea the numbers were so vague. It's understandable that records and files from that era would be non-existent. Thanks for the reply.

Hi Charlie. No definitive answer to your question since factory records of production data apparently no longer exist, so we only have bits and pieces of data as Norm pointed out.

Interesting data from a February, 1930 issue of an automobile trade publication which listed 1929 production total of 3,880,267 cars from 41 makes, plus a few miscellaneous makers. Ford: 1,310,119, Chevrolet: 780,042, and Essex: 191,337, followed by others with smaller production numbers. Durant was listed as producing only 47,716 cars in 1929. This is interesting data since it was compiled and published at that time, and so may be more accurate than later information. However, we also have to realize what the data is, and what it can and can not tell us:

Caveat #1: The data is for new cars registered in the various states during 1929, and is not factory production data. If we accept that cars are registered soon after being sold, then the registration data is probably some of the best we can find. The data was primarily compiled by R. L. Polk & Company, with Illinois numbers provided by Robinson Service, and New Jersey numbers provided by New Jersey Motor List Company.

Caveat #2: Durant exported the Rugby, so these cars would not have been registered in the US and would not have been included in the registration data. One source I encountered claimed about 1/4th of Durant production was exported, (not unreasonable when we consider how many Rugbys there are out there), so the US Durant registration data could significantly underreport actual Durant production. The same may apply for cars produced in Canada and registered there and not in the US.

Caveat #3: Did the data for "Durant" only include registrations for the "Durant" brand name, and if so, what about other brand names in the Durant Company? Do not know how Durant's various brands may have been reported each year in the industry.

I hope this has been helpful, in spite of the caveats!

We can also add although the vins shown at each plant go from X to Y and I will use Star M as example Aug 1 1926 to July 31 1927, they did not produce 4 times that figure. There are no two vins the same regardless of plant alpha. More making it seem they chugged out tons of cars. Don't know how they did that.

De Vaux did the same thing with M and C vins at the two plants. Actually the De Vaux / Continental aftermarkets show correct production, no alpha for De Vaux and Conny cars. You would think the 675 was 3745 from Oakland and 4609 from Grand Rapids for total of 8354 but nope 4609 total 675's. Again how did they do that so no car had same vin ? 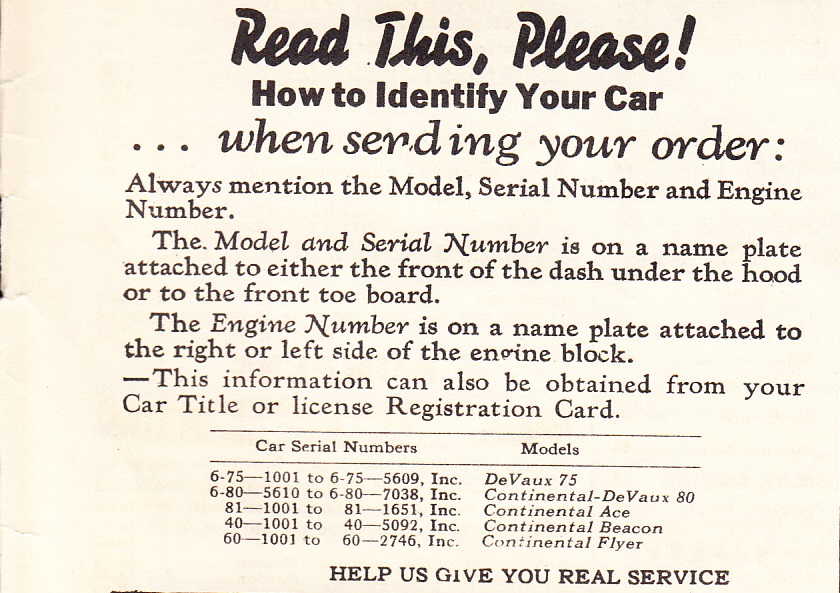 So much smoke and mirrors with Billy as to what actually happened.

Again, wow! I was going to use a total production number in an essay I'm writing about Mr. Durant. I think I'll skip that, to be on the safe side. Maybe just say "a lot"?

Thanks for all the replies. This has been entertaining - and educational.

You need to get a Star, Durant, Rugby (car / truck), Flint, Locomobile, Mason Truck, Frontenac, De Vaux, Continental Beacon / Flyer / Ace, join the fun of owning one of these vehicles and what might be correct on yours. As one or two owners have said, its like factory's tossed parts in the air and whatever landed first got put on that car, next car something else. Plant to plant used different parts on same model. Winter front rads were used on some models US but not even an option in Canada. We've been told our cars are wrong to have rear mounted wire wheel spares by US members, that's side mount. Wrong in Canada we had rear mount wire spares. The all red beehive taillight was not used 1930 US but was Canada. The carbs used 1931 / 32 on our Canadian cars even the carb king in the US (who knows most carbs world wide on his site) had never heard of ours nor our Frontenac. Durant Motors used Glolite headlights 30 / 31, Dominion Motors used Depress Beam 31 - 33. And they didn't wait to end of a model year to change parts making vehicles. In the aftermarkets and parts books to will see up to vin x used one part and after that vin used a different part.
De Vaux and Continentals were not Billy's cars but were very much welded to the hip using same parts. Small example the 680 De Vaux, 685 Frontenac, 633 Durant all used the same body / fenders etc of the De Vaux. Name's of course different. 680 De Vaux 40A 6 cyl Conny engine, 685 Fronty / 633 Durant 32A 6 cyl Conny engine.
Aren't you sorry now you asked ha ha.