I finally got the poster framed. Looks really good. I’ll enjoy it on the wall! 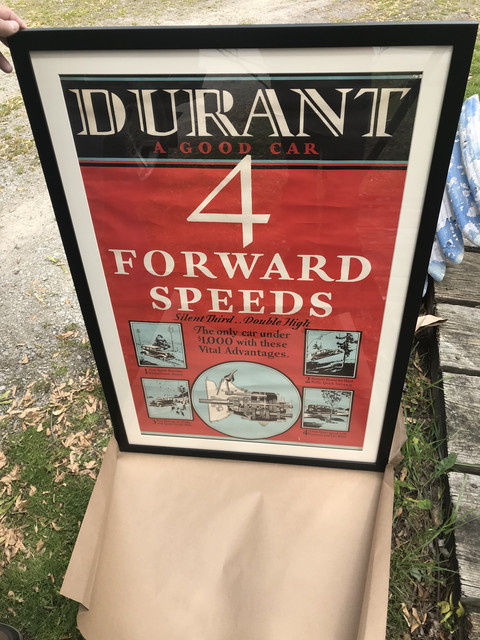 Where Are You From? Indiana

Hi Jeremy.
My first Durant, almost junk, was a 6-66 with the factory 4 speed tranny, but no overdrive as it had 2 2nd gears, big 4 speed tranny, caused the 4 speed cars to come out late as no one could build a 4 speed so Billy made one, so these engines did not have a lot of power to do freeway chauffeuring so had to install a used rebuilt Ford in line 6 from a about a 67 Mustang, w/ the Ford C-4 automatic, now great running 12 volt car, safe & can cruse all day at 70+ MPH. I sold that tranny with the stock 6 cly flat head continental engine to a member in Northern California, can't remember his name. I been told that my car cost $1,000.00 new but had never seen a ad with the $1,000.00 on it until this ad. That was a lot of money back then .My helper friend Jim & i have bought 2 other 29 Durants & a 30 from Canada all modernized for freeway driving. I think the 29 Ford 4 dr sold for about $385.00. Anyway great ad & the frame looks nice to.
Faithfully
Lance Haynes

Where Are You From? San Diego, CA

Do You own a car built by Durant? Yes a bunch of them

As I have mentioned before, I sold my Model 75 from Radiator back to the 4 speed transmission
to Jeff Cromeens some time after his fire. It might still be around. I would guess that without overdrive, it would have had a much lower rear end ratio for easy cruising in high gear.

At the time, I had my brother, the tractor mechanic, take a look inside. He was impressed by how substantial and well-built it seemed. Later Ford trucks used a four speed. Doubt if there was any influence on that design.

Later, in 1970's, Ford made a version of its top-loader with an overdrive in 4th gear. It doesn't have much of a following today, everyone just went directly to 5 speeds. In the 1980's I was driving K-cars, and I converted a couple of them to later 5 speeds. Made them much more sporty.