Hello Norm,
I hope you can give me a little help and insight. I'm looking at purchasing a 29 Rugby. You probably know the truck, it is from your area. For sale right now in Carleton Place. looks like it came from Constance Bay. It is in very rough condition. Motor is free, cab is very poor. Do you know the truck and is it worth the time and effort. If you would like pictures I can send some. This truck has been for sale for quite a while from what I have found.
Thanks in advance.

Where Are You From? ON

Email
n
Norm Toone
Re: Looking at a purchase

Hi Ted … no I don't think I know the truck. My friend in Oro sent me the Kijiji link yesterday on this. But you saying it comes from Constance Bay sort of rings a distant memory perhaps. I was emailing someone a number of years back near Carp (name ?) He picked up a 1929 Rugby and last I heard he was taking it to Leitrim to make a rod using the cab only. At first he wanted to restore it and then gave up that idea.

Ah ha same truck, I thought I recognized it using Google search. Same lad I just mentioned. KEVIN J. WEST, NOV 6, 2014 Put his phone number in search 613-227-0337 and get a couple of hits on Kevin. Has a 49 Packard on Kijiji per Google and like the Rugby has lost interest.

This Rugby sure gets around our area and not on its own steam. We only have 3 401's in Steve's Registry and if this is one, another addition.
Be a lot of work but nice to have yet another of Billy's vehicles around to enjoy.

Email
t
Ted Kester¹
Re: Looking at a purchase

Norm,
Thanks for the reply, if I do buy it how hard is it to get mechanical parts for it? It needs transmission parts, some brake linkages, rear spring front hanger and who knows what else. I would like to bring it back.

Email
n
Norm Toone
Re: Looking at a purchase

There you have me. We don't know the model and its possible same W5A engine and 3 speed tranny are used on cars. Nothing is set in stone on Billy's vehicles and parts vary plant to plant on same model. For example replacement blocks on W5A show two .. up to engine serial 484200 and after 484200. I'm assuming yours is after.

You might have to locate a donor chassis, have parts made. After markets do and don't mention the 401, if it is a 401. VIN plate should be on the firewall passenger side giving model and T vin from Leaside. Think I went through this with Kelvin in trying to id the model. Might be X or X2. If same tranny as some car models then again finding a donor. Don't know if the tranny is on this or not. It and a 1919 Gray Dort same front part were brought to Roblin's as scrap used as saw mills. The Gray Dort I got saved contacting the Gray Dort Club. The club members might have spare parts or know where. 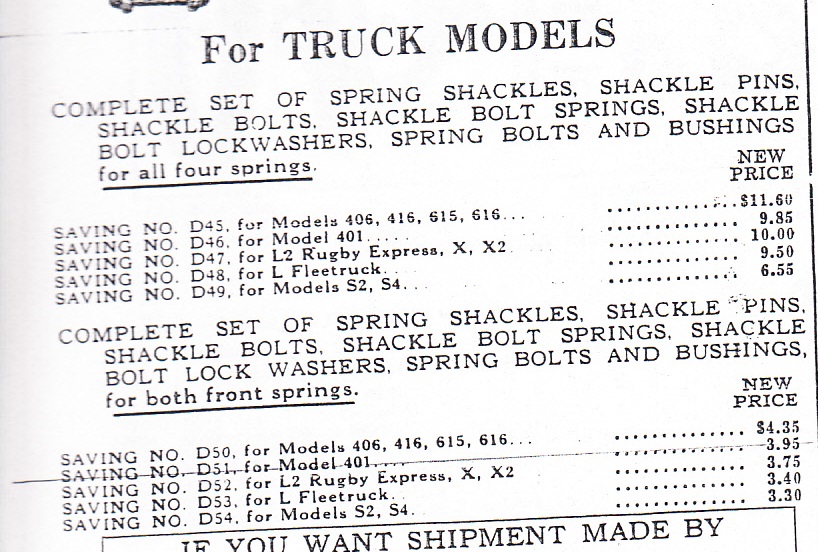 Email
s
Stephan Riffault
Re: Looking at a purchase

For your leaf springs you could contact TDL West on Cardevco Road (near Carp Road). They custom made my front bumper mount by using the old original pieces of spring steel I had. Fit perfectly without adjustment. The guy told me they have made all sorts of custom leaf springs including historic train car parts. It`s been quite a few years now but they were more than happy to make something for an old car!

Where Are You From? Stittsville, Ontario

Email
t
Ted Kester¹
Re: Looking at a purchase

Stephan,
Thanks for the info. I'm in the process of making a wish list of parts.

Where Are You From? Brockville