About 40 years ago I restored the dash gauges in my '31 Chrysler when I restored the car...I recall having the round bezels chrome plated and a fellow in San Diego who was also restoring a '31 Chrysler sent me a set of or rather a sheet of vinyl self adhesive decal dial face images for the 4 gauges...I believe this was before anything could have been computer generated, they were pre-cut on the backing, just peal and stick...Don't know how he would have made them or where he may have gotten them...Anyway, they came out looking real spiffy when I got them finished and still look nice today....So, I am wondering if I were to attempt restoring the round gauges on my '32 DeVaux using this same method, I am wondering how to go about it, would I need to take pictures/images of gauges that are in somewhat good condition and take the images to a print shop for them to enhance and size and then print or whatever they would do? The Chrysler decals were white with black lettering, the DeVaux would need to be black with white lettering...Also as I recall the gauge faces were riveted to the gauges and not easily detachable....Is all this just old school for today?

Bill- I've used momamanufacturing.com for instruments and they do a fantastic job. They are right near your summer home in Arizona. As far as having the lettering copied onto a vinyl sticker, I think that is possible if you or someone you know is computer knowledgeable, who can then transfer that to the right size sticker. You would have to use an exacto knife and cut the hole in the sticker for the gauge window. Maybe you could just do the half that doesn't involve the attaching rivets(shouldn't show anyway). Good winter project. Ross

It looks by momamanufacturing does excellant work, will check in with them...


These are the '32 Chrysler instruments that I used decals on 40 years ago, they look similar to the '32 DeVaux other than a reverse color...Can't remember how I worked the decal over the rivets/pins or if the pins were removable...Dash board is a cheese cloth job with grain pattern, the lacquer finish is starting to get a few small cracks from old age. 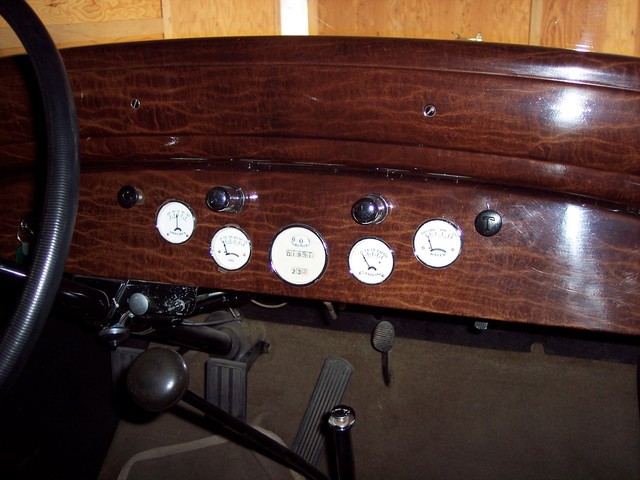 This is the instrument cluster on the '32 DeVaux that I am contiplating using decals to referb, the white gauge may be from a early Chrysler? And this is Bob's '33 instrument cluster that I pulled off of the picture page. Bill
I know you probably want to do this yourself but there are a number of companies and individuals that restore speedometers and guages around the country. There is one I think it's named Bob's Speedometers that a lot of the Triumph & MG people use and he's in Southern California. I believe he does other makes too. I'll look up some of the others that I have heard people using and post it here when I get a chance.

What are the odds of running across an envelope after nearly 45 years marked "1931 Chrysler instrument decals"...I had forgotten that the fellow in San Diego had sent an extra set of decals in case I goofed when I installed them...I thought this was space age technoliagy back then... Anyway, still kicking this can down the road...My son Dean is checking in with a company that does all their Graphics and decals ect. 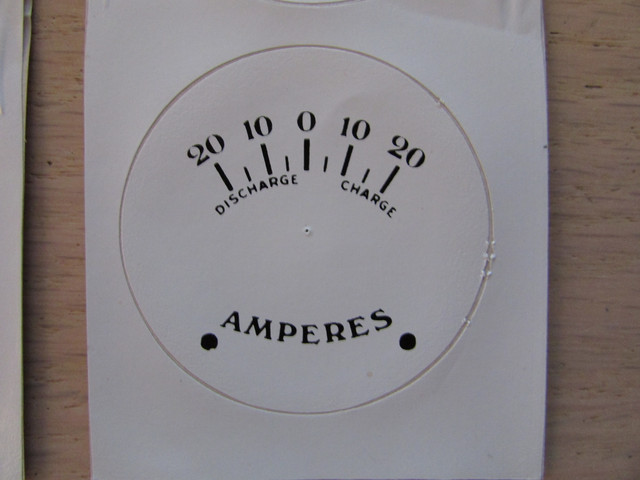 A little progress, working with a graphic company in Yuma called "Sign Pro" they came up with some snazzy looking decals for the '32 Devaux instruments...Carlos used photos from myself and Bob's '33 durant instruments and starting from scratch did the art work by computer program, using the photos for sizing and layout....They were a little difficult installing mostly because gauge pointer stop pins could not be removed and the stop pins needed to project threw decals.

This is the mixed spicies of instruments that I needed to restore back into the original design face plates, no they are not silk screen, but looking at my original silk screen gauges they haven't held up all that well...The tempature gauge was not working but I was able to repair using a new tempature gauge's bulb as a doner (place the new gauge bulb in Ice water then sever the tube and solder it onto the old original gauge using a sleeve. Not sure Norm would have noticed it but after restoring the Oil guage and callabrating it I now see a typeo, Dang me, will have to redo that gauge. Another pic with gauges and newly machined cluster plate 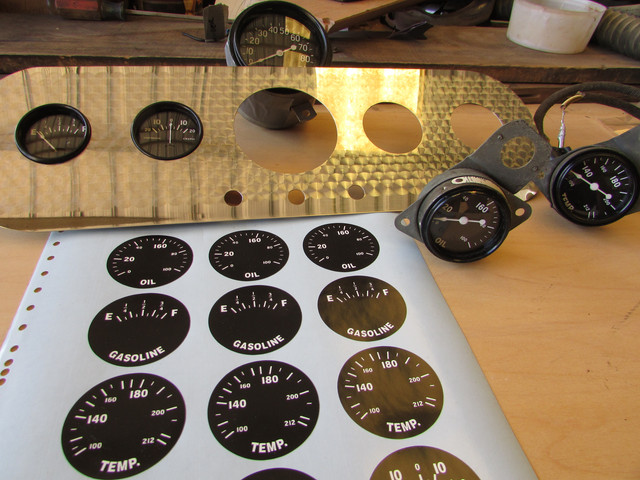 This was kinda fun, the old cluster plate was, I think nickle plated brass .020", well tarnished and etched, so rather than having it re-plated and taking the chance of burning threw the nickle when doing an jeweling or engine turned finish I picked up a piece of .030" mirror like stainless from McMasters and machined the plate to same specs as original and using an extra fine Craytex 1/2" rubberized abrasive rod (approx 400 grit)and the mill, was able to duplicate the same texture and appearance as the original. 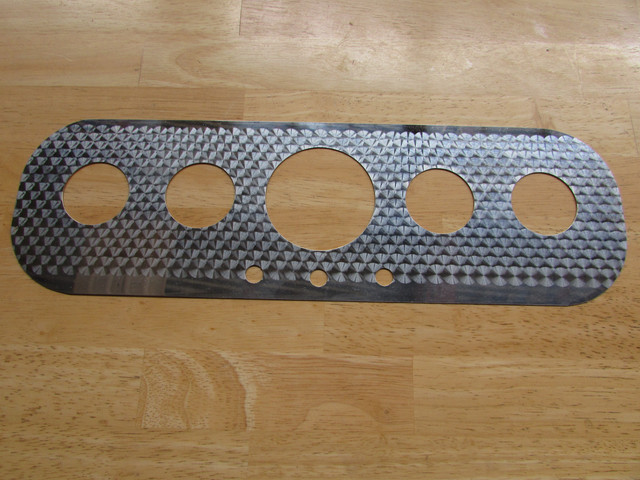 
Anyway, this is some of what I've been up to lately, and Hey, I have just about got all the wood done in the DeVaux that will be needed. 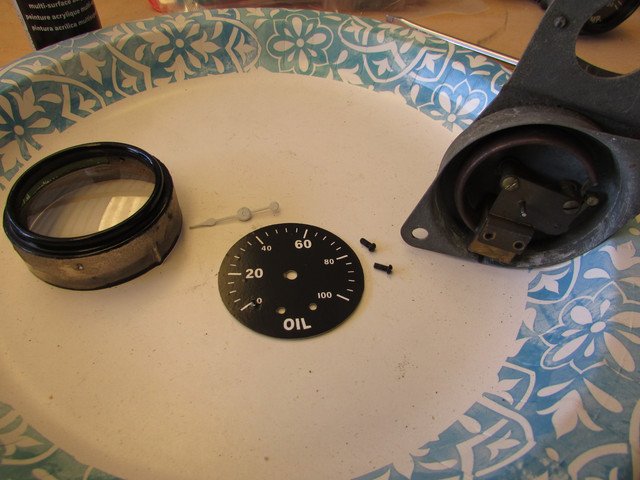 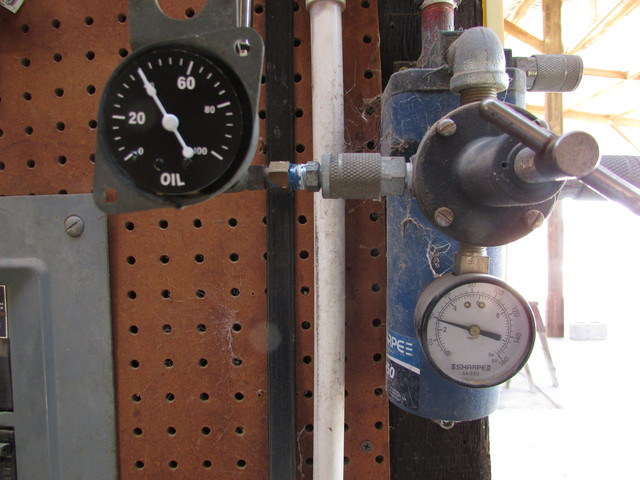 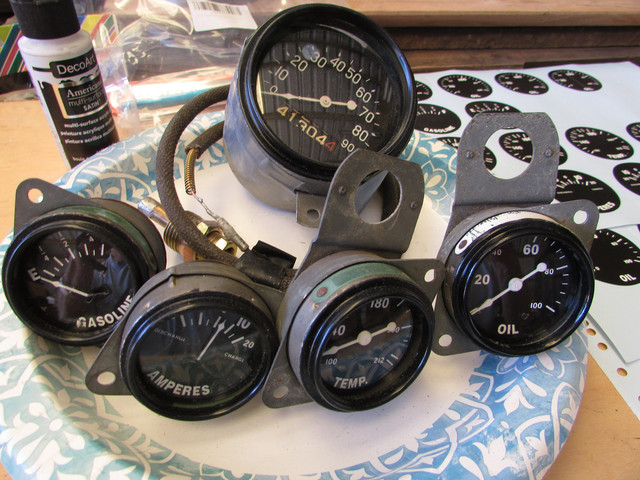