Any thoughts on painting the honeycomb radiator core on a 1923 A-22? The radiator currently on my car is a Star radiator and was either originally black or painted later and has a black painted surround. I am going to a correct Durant radiator on my A-22 and using a chrome sport-touring style surround. Am I imagining it or did I read at one point the Sport Touring A22s had white or silver painted radiators? Even if I painted it black, it would improve it's appearance markedly. Advice appreciated.

Todd;
Probably were painted black as that was the cheapest paint the factory could use. Eastwood makes a radiator paint just the right consistency for radiators. Not to thick to clog up the air flow.

All white tires and white radiators were used on the A-22s...Brouse through some of the "1923 Lancing facrory pictures" in our Special Interests....I have heard that an asphalt based paint was used in radiator shops as a non insulating type paint, but for me it is usualy rattle can black and used sparingly.

Bill, I think I found the picture you are talking about. I believe that picture is where I got the idea about the radiator being white. It seems like maybe someone in Australia or New Zealand also mentioned they were all white down under as well. I also note that the picture on the site of Ray Keto's A-22 appears to show a white radiator. Am I nuts to want to paint mine factory white? I do not have fully white tires, but do have white walls.... 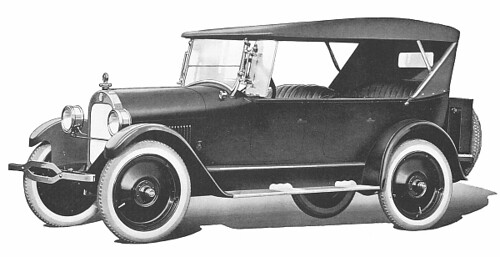 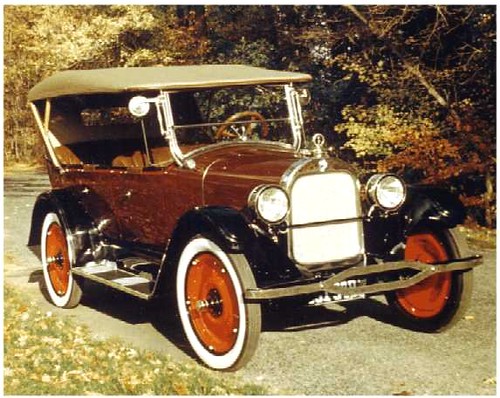 I see that they were also painting Star radiators white, maybe when they developed the prefered blackwall tires of the time that that trend went away? I like the looks of the white radiator and had concidered painting my A-22 radiator white but I have yet to see another radiator painted white other than Ray Keto's....I guess it is a personal preference, I was afraid that it would make the radiator the focal point and people wouldn't see the rest of the car.

That's a good point about being a distraction Bill. I think I will give it a try all the same. Here's to being a little different!

Sounds good Todd, you may be a trend setter....Hope to see you in Minnesota in Sept. with a white radiator.

You won't be the only one with a white radiator. We painted Will's A22 radiator white. Use the paint sparingly.
We spoke to an old timer. He said that in his memory only "big" cars had the radiator painted white.


Where Are You From? Guelph, Ontario, Canada

Where Are You From? Lake Taupo, New Zealand

Do You own a car built by Durant? A22 Sport Tourer

A22's were produced Long Island originally and all the other plants after. We have N, L, T, C, M, E vins in the New Registry and we have yours listed there Graham. Terry's site the cars shown seem to have black rads 1925 and later.
Durant Standard Christmas Dec 1923, Mike has in the museum, seems to show a white rad page 6 and 7, if its an A22.

Gord-
Any recommendation as to what kind of paint I should be using sparingly? I wonder if white aerosol engine paint might just be the ticket.

Good to know that I am not out of my mind going white. Should make for a lot of interesting discussion with the local Model T/A crowd.

We used a very light grey "Tremclad" aerosol paint (same as Rustoleum in the US)
I would think any light grey would look OK. We didn't want the rad to be glaringly white. That was a personal preference. Time will tell.

If I can figure out how to post a picture, I will do so.

Ask, the paint does not affect the cooling water ?. Many people tell me that is not good paint the radiator, auto warm. You have experience in painting the radiator ... .. Thanks for the tips.

Where Are You From? Argentina

Darn! Wouldn't you know that I recently came across a note concerning the radiator paint that my dad (Ray Keto) used on the Durant. I know I didn't throw it out, but neither do I know right off which pile of papers I "filed" it in! I wish it could be easily retrievable, but I've had so many of his papers to go through that nothing is quite organized yet. And I am also cleaning out his garage. Yates, I think you know what a job I have ahead of me - you've been in his garage. Also I believe that in the picture of my (Ray's) Durant shown in the post is not a true representation of the actual color. The photo shows too white. I have a picture I will try to post. In my picture the white radiator does not stick out or deter from the looks of the car. I'm sure it wasn't a stark white paint that he used. I'm sorry that I can't just go to the information, but will try to locate it. Wish me luck!


Where Are You From? smithsburg, Md.

Hilkka, that sounds wonderful. I look forward to seeing the picture with a better representation of the color. I am also eager to know the info on your father's note once it's relocated! Good luck!